Posted by Mrs. JP
These first pictures are from early October when we got them.  The first picture is Olive and the second is Trudy.  Our neighbor came over and took these wonderful pictures. 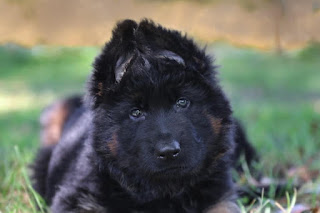 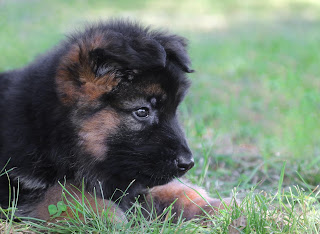 I’m excited for Christmas! Going to be a simple thing here, how about where you are? 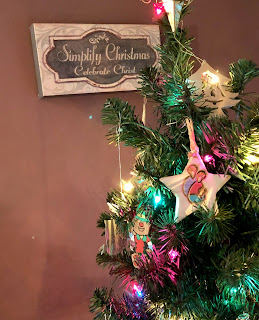 This blessed me so much that I had to share..

Posted by Mrs. JP
"The unsearchable riches of Christ."
Ephesians 3:8
My Master has riches beyond the count of arithmetic, the measurement of reason, the dream of imagination, or the eloquence of words. They are unsearchable! You may look, and study, and weigh, but Jesus is a greater Saviour than you think him to be when your thoughts are at the greatest. My Lord is more ready to pardon than you to sin, more able to forgive than you to transgress. My Master is more willing to supply your wants than you are to confess them. Never tolerate low thoughts of my Lord Jesus. When you put the crown on his head, you will only crown him with silver when he deserves gold. My Master has riches of happiness to bestow upon you now. He can make you to lie down in green pastures, and lead you beside still waters. There is no music like the music of his pipe, when he is the Shepherd and you are the sheep, and you lie down at his feet. There is no love like his, neither earth nor heaven can match it. To know Christ and to be found in him—oh! this is life, this is joy, this is marrow and fatness, wine on the lees well refined. My Master does not treat his servants churlishly; he gives to them as a king giveth to a king; he gives them two heavens—a heaven below in serving him here, and a heaven above in delighting in him forever. His unsearchable riches will be best known in eternity. He will give you on the way to heaven all you need; your place of defence shall be the munitions of rocks, your bread shall be given you, and your waters shall be sure; but it is there, there, where you shall hear the song of them that triumph, the shout of them that feast, and shall have a face-to-face view of the glorious and beloved One. The unsearchable riches of Christ! This is the tune for the minstrels of earth, and the song for the harpers of heaven. Lord, teach us more and more of Jesus, and we will tell out the good news to others.

Blessings from the holler...
0 comments

Posted by Mrs. JP
Yesterday as I drove home from my shopping I heard this pastor talk on the radio about a couple of verses, so I decided to look them up this morning for my readings. Wow, what a blessing.
I read John 15:4-5 where Jesus says “ I am the Vine & you and the branches; he who abides in me bears much fruit, for apart from Me you can do nothing.”   I think that’s nothing of eternal value.
However, in Philippians 4 Paul is basically giving the recipe for life which I encourage you to read but for this subject I looked at verse 13  He was talking about how he could be content in any situation. I challenge you to look up some of his “ situations “. But, he said in vs 13  “I can do all things through Him who strengthens me” I.e. All things can be done by me But only thru my Lord’s strength in me! And vs. 19 says “ God will supply all your needs according to His riches in glory in Christ Jesus.

I know these facts to be true. I’ve seen God supply my needs. I’ve looked back and things have been done not by my puny strength but God’s.
So, how long will I remember these things so necessary for a fruitful and peaceful life?  Surely this will drive me to pray more to Him who is gracious and wants to hear my prayers. Prayer is my link to my gracious Heavenly Father who delights to hear from me. I will close with my new favorite quote.

Thou art coming to a King, large petitions with thee bring, for His grace and power are such none can ever ask too much.
John Newton ( author of Amazing Grace)

As always, blessings from the holler...
0 comments

I am going to try to do this again ,,

Posted by Mrs. JP
straight away I’ll tell you there have been some changes in the pack. My keeper, my other darling is now gone and thus the absence from the blog. I just couldn’t talk about Charlie not being by my side, even now it stings.  Corrie has also gone to the bridge of rainbows at a ripe old age.  Sigh... 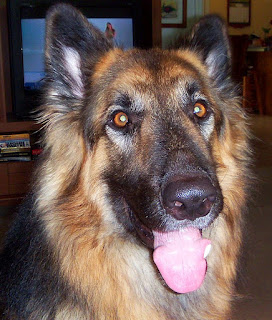 That being said, we have a bouncy new couple of loves that I want you to meet. Our oldest of the two is still young and we’ve had him since he was a pup is Buster. His mom was rescued pregnant and desperate, we are honored that we got one of her pups from my new favorite rescue place. They have the best foster mom’s called FOR out of Huntsville Alabama. He’s the most chill puppy we’ve ever had and God knew that’s what I needed at the time.  Buster is a Staffordshire terrier - Pit bull mix and is a love bug.  He would snuggle with me all day if I let him.
This first picture cracks me up because when he was a pup he did this thing with his tongue.  haha.  He's so cute and I just can't say it enough, just so layed back unless our neighbors, the cows or deer come calling and then he is all business.  He is a treasure as they all are. 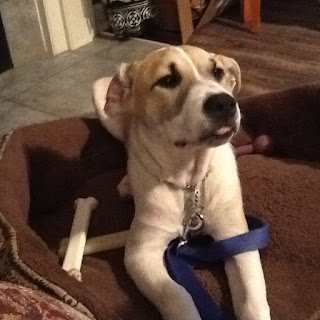 Here he is at one yr old and looking like quite the little man.

So, I just know in my heart that our home isn't complete without a German Shepherd.  That's just us.  So, we went to FOR for our newest member of the pack and got a Parvo survivor.  She was left at a Vet's office I believe and they really worked to keep her alive maybe that's why she's so cocky.  Her name is Lola, (she was a showgirl, and she wore feathers in her hair and a dress cut down to there) okay, I'm back.  Our girl's name is Lola, because I like that name, she's a spitfire, she's a barker.  She barks at thing, for thing, for nothing, because she's tired, because she's bored, because someone has her bone, a leaf went by,,,you get the drift...She's a nutt!!

These first two pictures were taken by her foster mom and I looked at them daily as I prayed for her survival as they tried to stabilize her tummy and pack on a little weight.  Those ears, that smile! 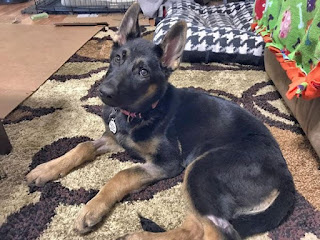 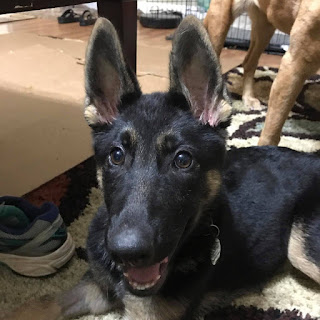 Here she is at our house after a few months of good living and many pounds later.  Don't let the mellow look fool you, she's a drama queen.  I love her haha!  Oh, one thing I forgot to tell you about Lola, she loves to lick Scrappy and Violet in the face hello.  I've never had a dog do this.  I really hope is goes away with puphood and I know Scrappy does because she's her favorite victim.  Scrappy is super cute and all but the poor thing also has the cleanest face in the house! 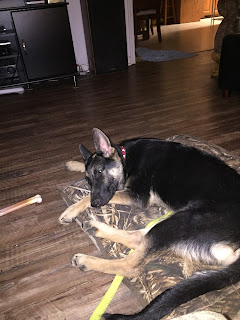 Both Buster and Lola are being taught basic obedience by me and we will hopefully progress to off-leash and advanced obedience in the spring.  Buster loves the treadmill, Lola is going to love it because I say so :)  A good dog is a tired dog, especially is that dog is a super drama queen.

I pray that God has blessed you all since we've talked  I pray that you're walking with Him and that you all have a blessed Thanksgiving if I don't post before then.  Although, I'm going to try to do better.  As always, blessings from the holler... 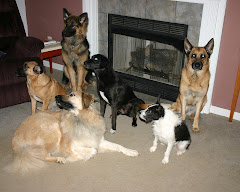 You can click the thumbnail for a larger view of them. You can also click each name below to jump to each one of their introductions. Enjoy your visit! 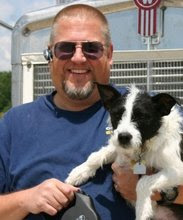 Some of our favorite links... 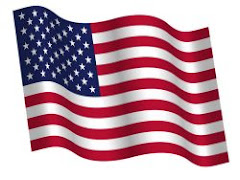 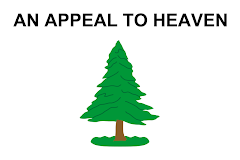 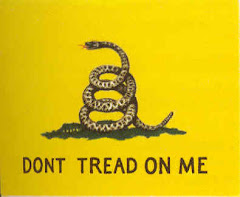